Bitcoin’s intrinsic value (an estimate of the actual true value) is still below market price, according to JPMorgan.

“The gap has not yet fully closed, suggesting some downside risk remains,” said JPMorgan strategists led by Nikolaos Panigirtzoglou (MD for Global Market Strategy) in a note published Friday, as reported by Bloomberg.

The market price of bitcoin has declined by almost 40% from its peak, while the intrinsic value has increased by around 10%, strategists said. 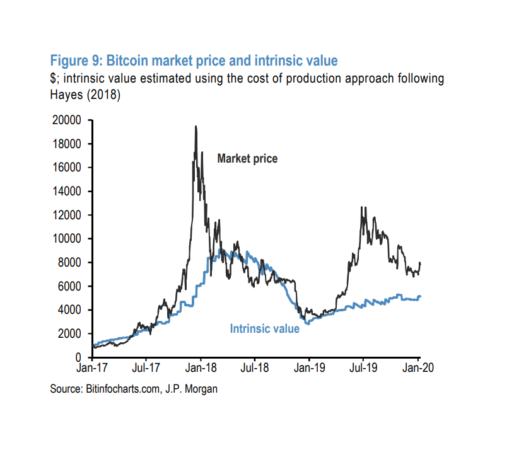 The investment banking giant calculates the intrinsic value of bitcoin by treating it as a commodity and looking at the marginal cost of production including computational power employed and electricity cost, per the report.

Bloomberg Intelligence, on the other hand, recently said that bitcoin price is set to increase this year. Mike McGlone, a senior commodity strategist for the firm, said that bitcoin’s fixed supply of 21 million coins and increasing adoption are likely to support bitcoin’s appreciation in 2020.

JPMorgan also sees "high anticipation" of the launch of CME bitcoin options among market participants. The options are scheduled to go live today. "It was only a matter of time before options started to account for a big part of crypto," Rich Rosenblum, co-founder of crypto trading firm GSR, told The Block last week.