The U.S. Department of Justice got schooled in how not to manage expectations on Crypto Twitter Wednesday morning after it teased the announcement of an "international crypto enforcement action" in a move that immediately caused declines in the price of bitcoin and other cryptocurrencies.

Speculation was rife about who might be targeted, with the industry on seemingly endless tenterhooks amid multiple investigations and bankruptcy filings in the wake of the collapse of the FTX crypto exchange. Hours later, the DOJ announced that it had arrested the Russian founder of “notorious” Hong Kong-based crypto exchange Bitzlato, lauding its move as “a significant blow to the cryptocrime ecosystem.”

The crypto industry yawned. Bitcoin immediately reversed its price slide. And then came the memes.

“Never heard of it,” tweeted Hailey Lennon, a partner at the law firm Brown Rudnick, who advises on crypto issues.

“Wtf is Bitzlato?” a Washington, D.C. source said in a text message.

Crypto watchers were underwhelmed by the DOJ’s takedown of Bitzlato, an exchange that allegedly partnered with the now-defunct dark net market Hydra to move more than $700 million in illicit funds. Founder Anatoly Legkodymov was arrested in Miami on Tuesday night for his alleged role in the “high-tech axis of cryptocrime.”

Hours before the Justice Department announced Legkodymov’s arrest, speculation had been mounting that law enforcement could be targeting a much bigger fish.

"It seemed like almost everyone on Crypto Twitter was certain that DOJ was going to announce an action against Binance," said Carol Van Cleef, a Washington lawyer and CEO of Luminous Group, referring to the exchange that aborted a surprise plan to take over FTX last year.

Binance didn't immediately respond to a request for comment about the speculation. CEO Changpeng “CZ” Zhao appeared upbeat on Wednesday in an interview at the World Economic Forum in Davos, Switzerland, where he discussed topics including his hair style and favorite travel destinations.

"This just felt to me that today’s action was a mere stepping stone to the next thing that’s bigger, probably much bigger," Van Cleef said.

News that law enforcement had taken down a crypto exchange that hardly anyone had ever heard of — and not one of the largest exchanges on the globe — landed with a thud.

“It is far from a household crypto name,” said Timo Lehes, the co-founder of the decentralized finance platform Swarm Markets.

The DOJ’s move was particularly frustrating for those who think that American officials have failed to take action against much larger firms like FTX, Three Arrows Capital, Voyager and BlockFi before they filed for bankruptcy. The Treasury Department's Financial Crimes Enforcement Network and French authorities are taking concurrent enforcement actions in the Bitzlato case, according to a press release.

“Very low-hanging fruit treated as big catch. It is not,” said Joseph Collement, general counsel at Bitcoin.com. “The real crime is the DOJ not protecting Americans against the list of FTX, Voyager, 3AC, Genesis and the many more insolvent [centralized exchanges].”

Within minutes of the DOJ’s announcement, crypto watchers filled their Twitter feeds with jokes about the Bitzlato arrest.

One popular account posted a meme depicting Bitzlato as a feather aimed at a soldier, while knives and missiles labeled BlockFi, Voyager, Celsius and FTX pointed toward a sleeping civilian. Another dredged up a 2011 post seemingly written by Legkodymov on a bitcoin forum. Several others referenced espresso, calling the relatively unknown exchange “bitzlatte.” 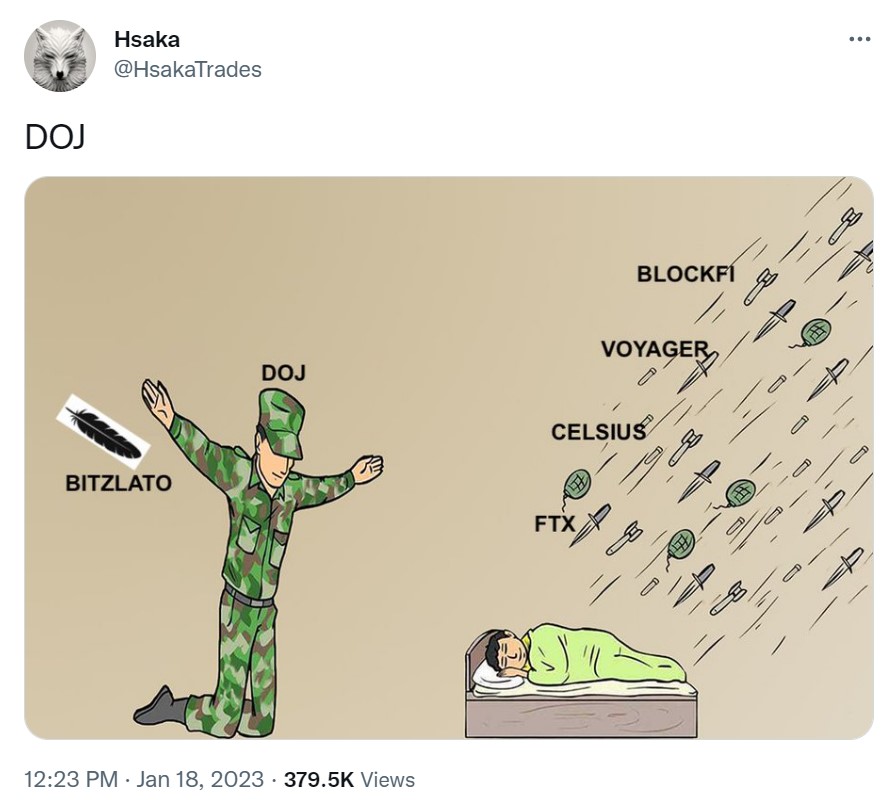 Despite the jokes, others applauded law enforcement for tackling the illicit crypto exchange, even if they had never heard of it.

“I also heard about Bitzlato for the first time today, but (despite the funny memes) the DOJ's action makes clear that they will prosecute those who exploit the crypto ecosystem to commit crypto crimes. That's good policy,” Stuart Alderoty, general counsel at Ripple, said in a tweet. Gus Coldebella, a partner at the venture capital firm True Ventures, said he appreciated seeing the U.S. government and its international partners working to eliminate criminal actors from the crypto space.

And some suggested the Bitzlato enforcement action could be a sign that the DOJ is quietly working on larger crypto enforcement cases that deal with similar legal issues.

“Disappointed by Bi ... zlato? Don't be,” Luminous Group's Van Cleef tweeted. “A much broader message was delivered — the blueprint for future actions.”