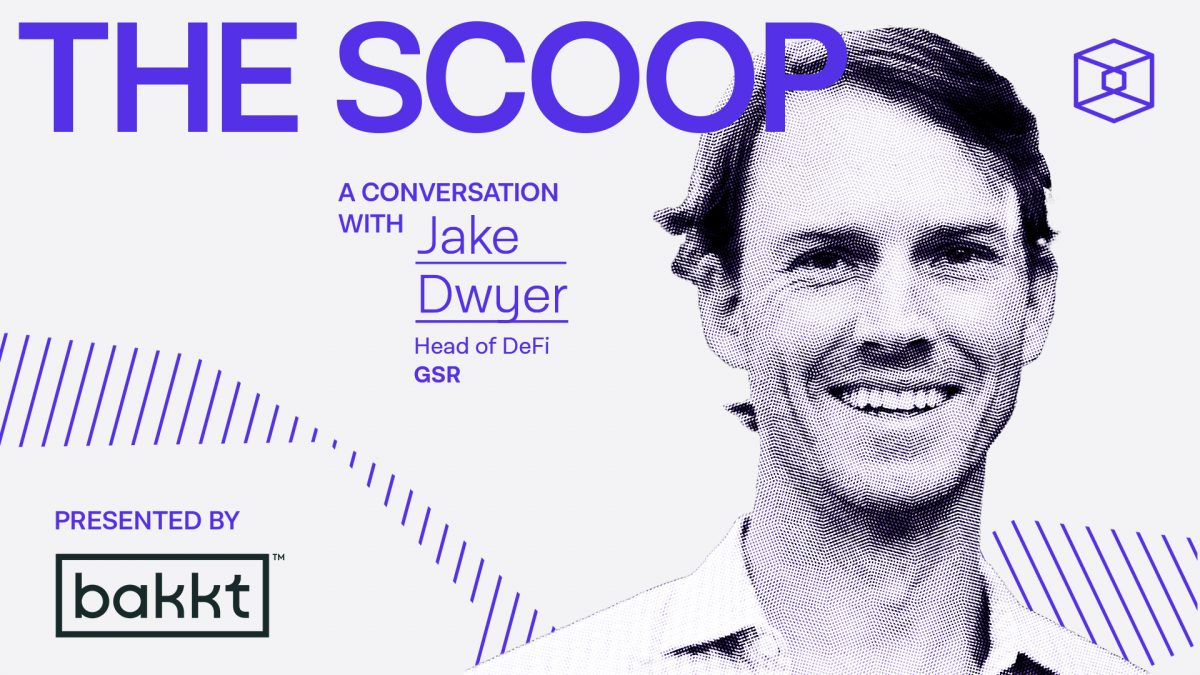 Episode 74 of Season 3 of The Scoop was recorded remotely with The Block’s Frank Chaparro and Jake Dwyer, Head of DeFi at GSR.

This episode is brought to you by our sponsors Bakkt, Kraken and Masterworks

About Masterworks
Masterworks is democratizing the exclusive multi-trillion-dollar art world. Instead of needing to write a $10 million dollar check to buy one Picasso painting, you can buy shares of masterpiece paintings. Masterworks has securitized over $250 million worth of art for their 235,000 members and was recently valued at over $1 billion, making them the first and only unicorn in the alternative investing space. Invest like a billionaire today with a few easy clicks at masterworks.io/scoop

GSR is building out a space for itself at the intersection of traditional and decentralized finance worlds, according to its newly-minted head of DeFi, Jake Dwyer.

During the latest episode of The Scoop podcast, Dwyer explained that the firm is building out the capacity to both create new trading products as well as provide liquidity to DeFi protocols in a way that's more familiar to the traditional finance players who want to become more closely involved.

With these plans in hand, GSR expects to contribute more than $1 billion in total value locked over the next year — fueled in no small part by the increase in interest from traditional finance sources.

"People are sitting on pretty substantial positions just by being early users in these protocols,” said Dwyer. “There's still this big position that people are accruing and they want to be able to manage those things while holding on to those positions."

In the last six months, GSR has expanded its venture investment activity in DeFi as a more central component of the business, with an eye on fixed income protocols and credit.

"You've got things like Aave and Compound and others on other chains for borrow and lend. But we've seen numerous innovations around the second-order derivatives of Swivel and Tempest on the fixed and floating rate interest side of things," Dwyer explained.

Dwyer is excited about the collateral and interest rate segment of the market, which he sees as innovating at a fast pace. "I think that a lot of these different sorts of fixed income derivatives protocols that are out there are going to evolve in really exciting ways over the next the next couple of months."

He believes that DeFi will eventually match more centralized activities as the market will see increased innovation.

"What DeFi offers is in some instances, just sort of a new set of venues that look a lot like the centralized exchange venues that we're accustomed to trading on." He cited GSR's recent investments into Dydx and HashFlow, the latter of which Dwyer said recently reported a billion dollars worth of trading volume.

Looking to the future, Dwyer said he believes that it will be one marked by a variety of networks that serve different purposes — and in the background, in some cases.

"We believe that in the future you're not going to know what chain you're interacting with necessarily or care," he said.

These different chains will have varying kinds of specialization, such as high speed, high settlement, and the ability to create a central limit order book, according to Dwyer.

As he put it: “It's almost like if you wanted to use Uber and Lyft, you had to have two different phones, and that doesn't seem like a sustainable way of the future."